Never say never. Though I thought I would forever be an extra-fine/fine woman (we’re talking nibs here), watching all of those SBREBrown pen review videos (that man loves him some B, BB, and even BBB nibs), and receiving letters from friends who swear by juicy, fat nibs, I cracked. I had to explore. 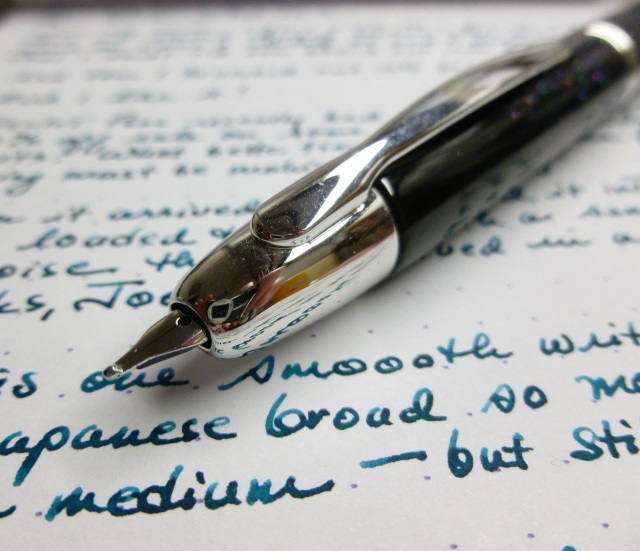 Goulet Pens recently ran a “Spring Cleaning” 20% off promotion on a number of items, including the Pilot Vanishing Point nib units. What a perfect time to branch out a bit. When the broad VP nib unit arrived, I popped it into my beloved and sparkly Raden VP (thanks, Dan!), loaded it from a sample vial of Noodler’s Turquoise (thanks, Joe!), pulled out some Tomoe River paper and let it fly. 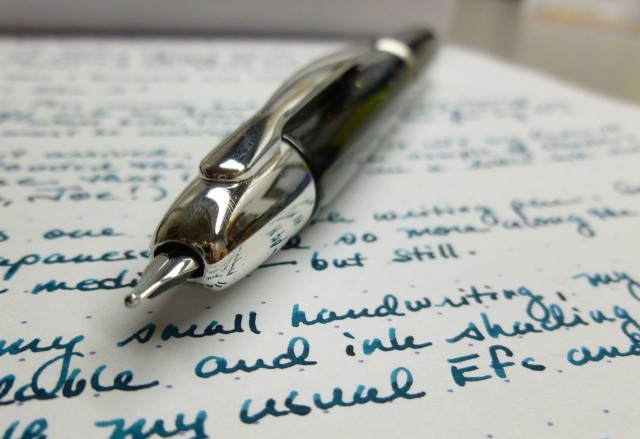 While I won’t be using broad nibs for my everyday writing— my handwriting is just too small for that— I can totally see myself transitioning to them for letter writing, when I can use my Tomoe River or Clairfontaine Triomphe paper, and when I really like seeing how an ink shades.

Granted, the Vanishing Point broad is, since it’s Japanese, more like a European medium, but still. I’d stepped away from my comfort zone and had to admit that it felt…well…comfortable. Wonderfully smooth. Nicely juicy.

(This keeps sounding dirty and I DO NOT MEAN FOR THAT TO BE HAPPENING.)

Getting back to my point (and my G-rating), all I’m trying to say is that it’s cool to take a pen body that you love, and swap in some different nibs for a completely different writing experience. The VPs are great for this, as are, of course, Lamys and TWSBIs. I see that Richard Binder offers Vanishing Point pen bodies (even the new metallics) separately, so I may go that route when I decide to spring for the cool looking green metallic. That’ll save me about $60. Since I own a range of nib units to swap in, why buy another complete pen? 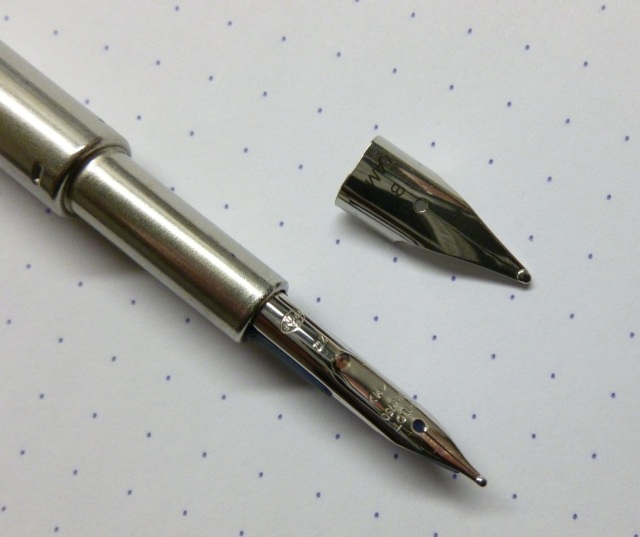 When I ordered the broad VP nib unit, I also picked up a Lamy broad nib as these are crazy easy to swap in and out of several Lamy pen models. And when I recently purchased my Edison Nouveau Premiere Cherry Blossom with a medium nib, I tossed a fine and a 1.1 mm stub into my shopping cart, as well. One gorgeous looking pen, three different writing options.

So have fun. Experiment. With nibs, I mean.

Many thanks to the fine folks at JetPens for sending along this bottle of Iroshizuku ink. I was not otherwise compensated, and this review reflects my experiences and observations with the ink in my pen and on my paper. Your results and opinions may, of course, differ.

When a bottle of Iroshizuku take-sami (Bamboo Charcoal) showed up in my mailbox, courtesy of JetPens, I immediately knew which pen I’d fill. I recently outfitted my Matte Black Pilot Vanishing Point with a black-plated 18K nib/converter unit, so I all I needed to complete the stealthy trifecta was a superb black ink, and here it was. 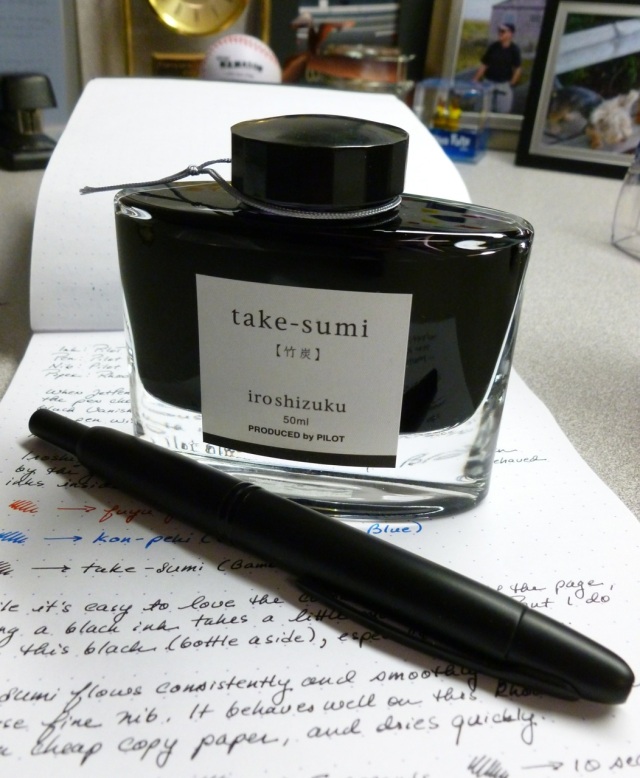 In my previous job of 14 years, I was required to write in black ink (ballpoint, but still) all day, every day. So you’d think that I’d run screaming for the hills now that I’m free of that SOP-dictated requirement. Funny thing is, I still like and use black ink, and am always on the lookout for a particularly good one.

I already have a few Iroshizuku inks (kon-peki and fuyu-gaki…both luscious colors) so I was pretty sure take-sumi would get high marks for good behavior. And it does. In this Vanishing Point with its fine nib (Japanese fine, so it’s like a western EF), take-sumi goes on wet, but dries quickly— easily within ten seconds, even on Rhodia paper. It’s smooth and consistent— a very solid black. Solid in performance AND in looks. It’s not a grey black, not a watered down black. Is it the blackest black ever? Probably not, though I haven’t jumped too far into the black ink pool. I’d consider it to be an excellent black— surely the best I own. (How many times can I say “black”? A lot, apparently.) 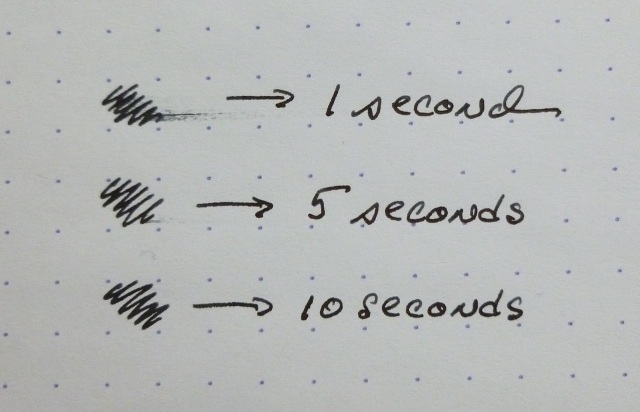 I don’t regularly expose my hand-written pages to liquid so waterproofness isn’t something I really care about, but in the name of science, I “spritzed” my page. 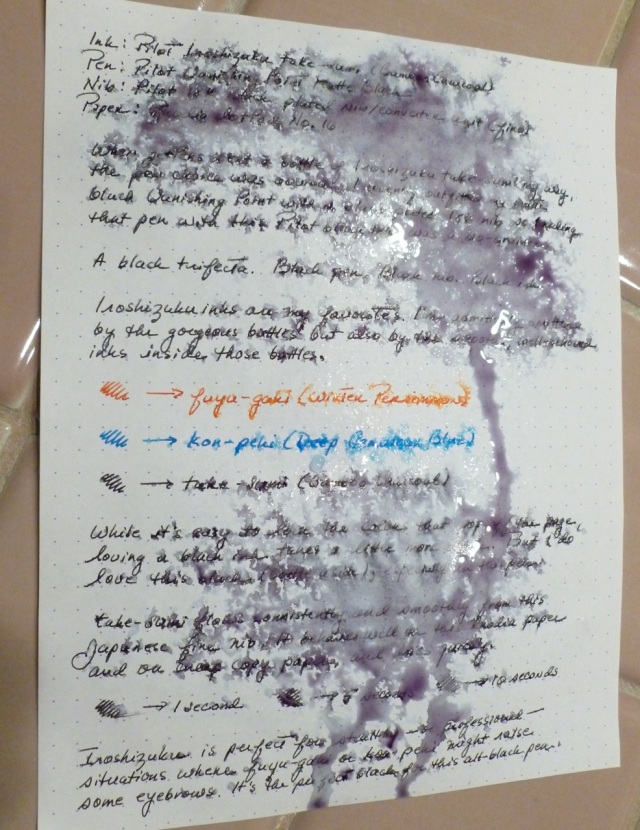 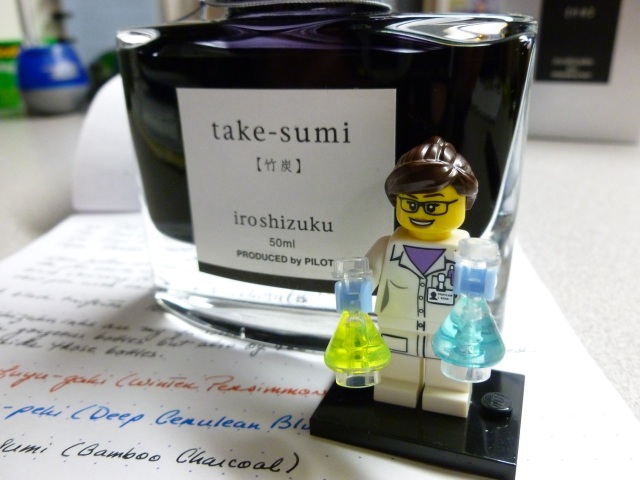 I don’t have a big collection of inks (though the pull to acquire more is strong), and I’m admittedly drawn to colors that look like the a glass of fine wine or the sea or a freshly sliced persimmon, especially when I’m writing letters and have time to appreciate an ink’s shading and depth and freshness. But there are plenty of times when I just need need to get stuff done, and black ink has always been just the thing for flipping on the “get to work” switch in my brain.

It’s easy to love ink colors that pop off the page, but loving a black ink takes a little more work. Packaged in that gorgeously iconic Iroshizuku bottle, take-sumi impresses with its lovely darkness. It’s like the night sky. Usually you take it for granted, but every now and then you look up and think “wow.”

Just what the doctor ordered

If there’s ever a month that requires a pen pick-me-up, it’s February. And this last one was particularly grey, in weather and in mood. One of our beloved pups (11 year old Boo) has been struggling a bit so we’ve been extra-anxious about him, which made the colorless skies and raw winds that much harder to bear. Basically, we’re raw nerves in need of brighter days.

Rather than cope with…ummm…”substances,” I’ve turned to pens. Well, one pen in particular– the Namiki Raden Vanishing Point that I picked up used from Dan Smith back in January. With it’s black lacquer body and heavy sprinkling of gorgeously shimmering abalone chips, the Namiki Raden Vanishing Point is good for what ails ya. It’s stunning, but not flashy. Colorful, but not blingy. The teal, purple, pink, azure, and emerald abalone chips almost look like they’re floating beneath the surface of the deep black body. When you consider the fact that each chip was placed by hand, it’s impossible to not be impressed. Mesmerizing, is what it is. Just like a starry starry mid-summer sky.

The pen came with a medium nib, but I found that it had a bit of “tooth” to it, so I made the decision to purchase and swap in a “Binderized” medium nib unit. A pen this good-looking deserves a stellar nib. And stellar it is. A “Binderized” nib is tested and tuned by Nibmeister Richard Binder…not customized, but optimized. Simply put, Richard Binder works magic with nibs. Magic.

And let’s not forget that this is a Vanishing Point, which adds another level of coolness. By clicking the rock-solid knock, the nib is deployed or retracted, just as easily as with a retractable ballpoint pen. Click. You’re writing. Click. You’re not. Dead simple. 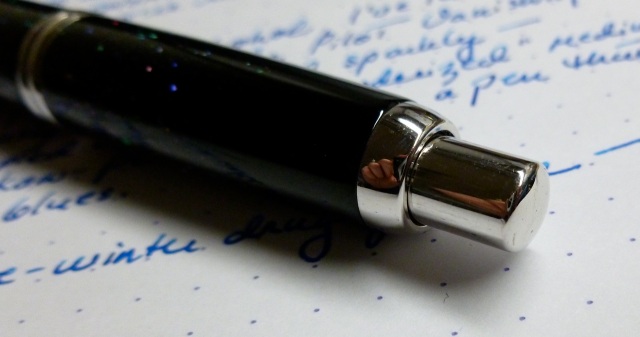 I filled the pen with Pilot Iroshizuku’s kon-peki (Ocean Blue) which works beautifully with the abalone accents. It’s a match made not in heaven, but in the ocean. Very soothing. Which is great because remember? Raw nerves?

I will admit to a bit of a break-in period with regard to the clip placement, but all is well now. I have a pretty typical grip, I think, so if you don’t, you might want to try one before jumping into the Vanishing Point pool. That’s one quirk with this pen that might be a negative for some.

Try before you buy

I can’t resist. Let’s take another look at those colors…

So this pen did the trick, and beat back the February blues. Apparently the Namiki Raden Vanishing Point is my drug of choice…and without the co-pay.

But you know what REALLY cured me? Little Boo, back on his feet.

Some things are more important than pens.

Check out another review of the same pen at Gourmet Pens.

Want to know more about this fabulous ink? Check out Brad’s review.