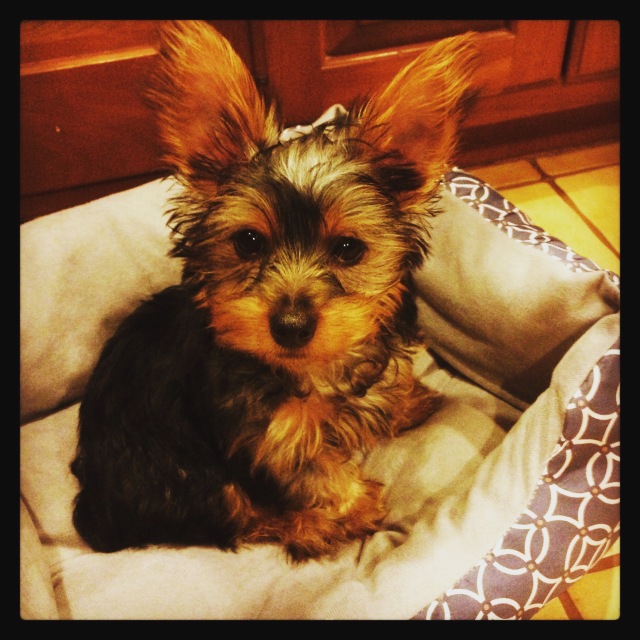 There once was a dog named Flapjack, who never really grew into his ears.

“The better to hear you with!“

Despite the ears, listening and behaving are not exactly Flapjack’s strong suit. He’s a stealthy little dog with his own agenda. The rules do not apply.

Because of this, Flapjack and his “brother” Charlie, are barricaded from the dining room where a lot of my pen/pencil/notebook collection lives. Things are mostly stored in boxes, but there’s an embarrassing level of disarray. I have great plans. And I try. Then I lose steam and go read a book instead. I really hesitate to share, but what the hell…

There is clearly work to be done. [Massive understatement]

Last evening we couldn’t find Flapjack, and quickly realized that he was barricaded INSIDE the dining room. The room was dark, but Fred yelled, “HE’S GOT A PEN!” Well, *&$#!! Flapjack initially evaded me by scampering around under the dining room table and staying just out of reach. I headed him off on one of his passes and found that he DIDN’T have a pen in his mouth, but this was not cause for celebration. Nope, not a pen, but he DID HAVE a BOTTLE OF INK!!! Brad Dowdy’s “Fire On Fire” Robert Oster ink—a plastic bottle of BRIGHT ORANGE INK clamped between those surprisingly strong Silky Terrier jaws!!

He was not in the mood to give up his “chew toy.” Despite those big ears, our yelling had zero effect, except to convince him that this was a real prize—something he should definitely hang onto. He clamped down harder and let out a low growl.

Plan B: A bribe of plain old dog food convinced him to release his find.

As you can see, the cap was chewed and damaged but remained intact, as did the plastic bottle.

And…thank YOU, Robert Oster for chew-proof ink bottles and caps! This could have been a very different–and very orange–story.

Twelve days into a 2019—a year in which I pledged to rein in pen purchases—I fell in love with a pen. Twelve days. That might be a new record for caving on a pledge. To be fair, I did ponder the purchase for a few more days, but I just couldn’t get this pen out of my head. 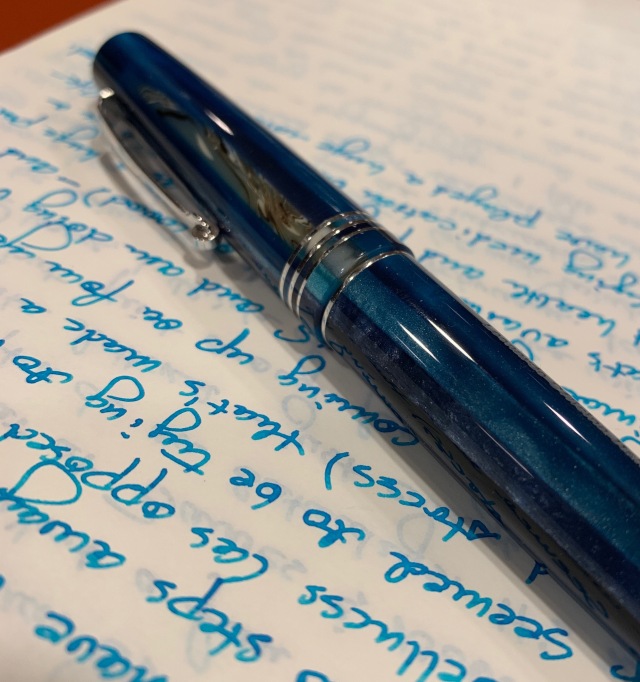 Can you see why?

I worked up the best rationalizations I could, which is one of my superpowers. This pen—the Leonardo Momento Zero//Blue Hawaii—is from a company that’s new to me.

A paragraph on the Armando Simoni Club site summarizes the lineage of the company this way: Leonardo Officina Italiana holds a special place in the heart of Armando Simoni Club pens, because the owners of both companies share a history and a passion for pens. In 1978, the father of ASC founder Emmanuel Caltagirone started his own pen company. His first customer in 1982 was Ciro Matrone, one of the founders of the Delta pen company.  Almost 40 years later, Ciro’s son Salvatore makes the Armando Simoni Club pens in Naples, Italy – and now, he has launched his own brand: Leonardo Officina Italiana. This brand represents everything we love: handmade Italian pens, beautiful materials, great nibs, and a true passion for pens.

So not only is this company new to me, it’s also relatively new to the pen world. Ah, a blessed loophole in my pen moratorium! If it’s a pen from a manufacturer that I don’t currently own, then maybe I could suspend my own (pretty darn loose) rule!

I held a meeting of the “Can we buy a pen NOW?” committee—a committee of one, I’ll admit—and the vote was unanimous in favor of said purchase.

The pen shipped from the Netherlands on my birthday and arrived about a week later. Once I had the pen in hand, I knew I’d made the right decision. It’s beautiful.

The material is resin but instead of being a solid color, there’s a pearly range of blues and browns and creams and shimmer that very much lives up to the “Blue Hawaii” name. 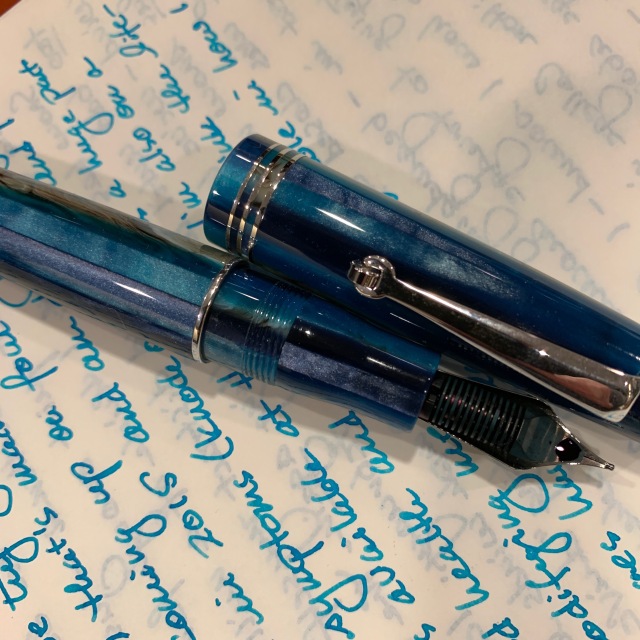 What’s also interesting is that the cap and body appear to be faceted, and yet they’re not. The effect apparently comes from the way the different resins are mated together. It’s one of those pens that’s always gives you something new to look at and discover. Handmade in Italy, no two Blue Hawaii pens will look alike because of the uniqueness of the material.

The steel nib is very simply adorned with the Leonardo logo and the nib size—a medium, in my case. It’s understated in the best way possible, and writes like a dream. A perfectly medium medium, it’s wide enough to show off ink characteristics and fine enough for my small(ish) handwriting. It’s a perfect fit for me, both pen-wise and nib-wise.

The build quality is flawless and even the included converter is substantial and well-made. There’s a blind cap at the end of the body for easy access to the converter, or you can just unscrew the body like you’d do for a regular cartridge/converter pen.

The pens are engraved with Leonardo Officina Italiana, and the pen’s number—the pens are numbered, but not limited—and tastefully accented with rhodium trim. For all of its good looks and obvious quality, the price tag on the Blue Hawaii pen is quite reasonable as upper end pens go. Purchased from Fontoplumo in the Netherlands, I paid about $167 for this beauty, which feels like a bargain given the exceptional fit and finish.

When I first made my health and wellness a priority, I found that eating an occasional high-quality snack tasted SO MUCH better than eating a bunch of mediocre snacks all the time, and I think this same idea applies to pen buying. Indulging in a pen “treat” that’s thoughtfully considered and high-quality seems like striking the right balance between “no new pens” and buying “all the pens.” I’m still looking to take it easy with pen purchases this year, but I’m glad I made an exception for this Blue Hawaii beauty. (My photos really don’t do it justice.)

As I said above, this pen shipped on my birthday—my 60th birthday—so I’m considering it a “momento” for this new decade. Guaranteed for life against any manufacturing defects (I wish I was!), I’m certain that I’ll enjoy my Leonardo Momento Zero Blue Hawaii pen for decades to come.