“It’s not getting what you want, it’s wanting what you’ve got.” -Sheryl Crow, Soak Up the Sun 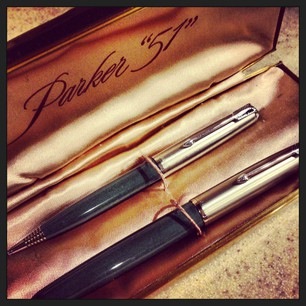 I recently acquired a vintage pen that was barely used by its owner, which is both cool and a little sad. Cool for me because I now own a sixty-four year old pen that doesn’t look a day over one, but sad in that the owner never put his mark on it. The pen never rolled across the surface of his desk, or went to the office in his suit pocket, or was scribbled with by his grandchild. He wrote his wedding vows, then put the pen away. Like I said, cool. And sad.

This got me thinking about pen acquiring and pen collecting and pen hoarding, and the fact that I’m undoubtedly in the throes of all three. It’s so hard to resist chasing all of the shiny things. What’s my favorite pen? Why the one that I just ordered, of course!

But as my pen cases fill up, I’ve started thinking about acquiring vs. collecting, and having vs. using. Like the 1959 Mercedes that’s purchased but never driven, it seems to me that pens that are rarely inked and notebooks that are squirreled away aren’t living their lives (says the person who has a bunch of empty pens and stockpiled notebooks). There’s something to be said for “mint condition,” but there’s also the joy that comes from using something, using it with care, and putting your mark on it.

Patina, according to one dictionary, is “an appearance or aura that is derived from association, habit, or established character.” When we use an object, a pen, day in and day out, we put our mark on it. It acquires a sheen or tiny scratches or a nib that’s worn to our style of writing. It acquires a patina. It acquires a life.

Coincidentally, as I was mulling all of this over, Sarj Minhas offered his thoughts on acquiring versus collecting, and developing a pen focus, on FPGeeks Podcast Episode #65. Some wise words from the one man pen show!