I’ve joined a small writing group, and this came from last week’s assignment—to use the word “judge” in a piece. In the process, I think stumbled onto my origin story.

“She has that Sedgwick nose!” my grandmother exclaimed at a jarring “EUREKA!” volume. Aunts, uncles, cousins, parents, and grandparents, all plowing through Thanksgiving dinner, lost interest in their turkey, and craned their necks to focus on my face. “That bump! That’s the Sedgwick nose!” she proclaimed as excited as if she’d discovered a nugget of gold in her mashed potatoes. Isn’t that what every 13-year old wants to hear? That their nose carries the bump seen in the heavy-framed portraits of long-dead relatives? My face burned at her pronouncement and their undivided attention. I melted miserably into my butternut squash. This was my legacy, they decided. Like this nose was a fine and desirable thing. To me, this legacy seemed like a gyp.

Those dead relatives hail from Stockbridge, Massachusetts, and I visited them—well…their graves—when I was a little older. To someone used to the plumb straight lines of a typical cemetery, the arrangement of their private burial ground—tucked just out of sight of Main St.—looked oddly random. No straight lines. No obvious order. But if you were a bird, you’d see that there was a plan. The patriarch, Theodore Sedgwick, rests in the bulls-eye position of this curious layout. Nicknamed “The Judge” because of his tenure on the Massachusetts Supreme Court from 1802 until his death in 1813, Theodore’s obelisk serves as the epicenter for concentric circles of graves. This unique cemetery, this so-called “Sedgwick Pie,” holds the ten dead children of Theodore and Pamela, his second wife. And their children, and their children’s children. One hundred and forty-four descendants of these two parents lie in neatly arranged, ever-widening circles, all facing that obelisk. Family lore believes that when Jesus says so, the Sedgwick dead will rise to face “The Judge” and their own judgment. 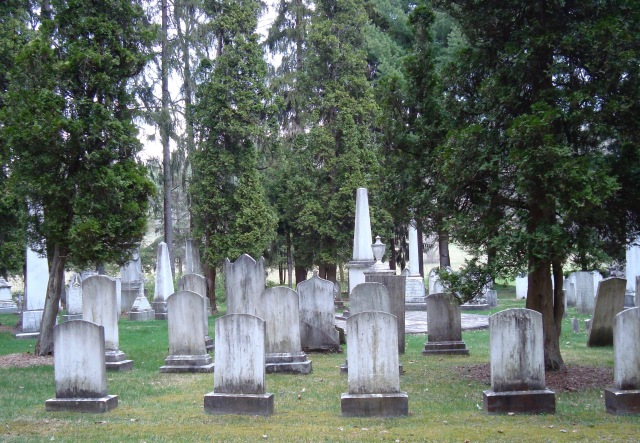 One grave captured my attention, even as a young adult. Catherine Maria Sedgwick (1789-1867) lies beneath an ivied cross in the innermost circle of “The Pie.” Theodore’s fifth child and third daughter, Catherine wrote and published pamphlets, novels, and an autobiography at a time when it was very unusual for a woman to do so. I like to think that my love of words, my desire to write—to worry over the puzzle of an essay—comes from her. That maybe she’s the reason I’m a stickler about the proper use of apostrophes. That she’s the reason I prefer dim lighting and pens filled from ink bottles when I journal before dawn. That she’s the reason for this need to write about everything and nothing. I imagine the jumble of genes that led from her to me, carrying this love of books and paper and pens straight into my marrow. Did my sense of humor arise from her DNA? Did she even have a sense of humor in that time of smallpox and harsh winters? I like to think that she did. And that what was hers is now mine.

A portrait of Catherine reveals that I wear her nose. I realize now, this is a fine and desirable thing.