Because I’m so pleased with the look, heft, and performance of my Faber-Castell e-motion pen, I did a bit of research on the brand, and liked the look (and price!) of the BASIC Black model. Amazingly, a few days after adding the BASIC model to my pen wish list, it popped up as the Daily Special in an email from the Pen Boutique, for a mere $28. I think you know the rest of the story.

So what do I like, besides the price? Let’s take a tour.

Carbon Fiber Barrel
As I’ve said before, there’s something about carbon fiber that grabs me every time. And carbon fiber for $28? Unheard of. I can’t find anything that says that this is pseudo-carbon fiber, so I’m assuming it’s the real deal. The subtle checkerboard effect is quietly cool. The pen has perfect heft, but is not as heavy as the e-motion due to the lack of a metal cap. Ooooooo…one more thing…the barrel is long enough to hold a spare ink cartridge so you’re always prepared to write.

Rubberized & Grooved Grip
At 1-1/2″, this is a good-sized grip. And it’s rubbery, so it’s nicely grippy. The rubber is quite firm, but not SO firm that it winds up being slippery. The evenly spaced grooves add a bit of interest and “tread,” so holding on feels natural and easy.

That Nib
So smooth. And quite wet. I’d say that this pen runs a hair wetter than the e-motion. In fact, the wetness was a bit of a challenge at first. I initially inked the BASIC pen with a Private Reserve Lake Placid Blue cartridge (a converter is not included, and I don’t have a spare, as yet). I love that color, but I write small and fairly slow, and this particular ink in this particular pen was super wet. I had trouble keeping up with the ink. After a bit, I swapped in a Levenger Black cartridge, and the flow became much more manageable. The nib is a medium, so the flow is generous, but it’s no longer a gusher. In fact, I quite like the bold, smooth flow now. Every now and then I experience a touch of a hard start at the beginning of a writing session, but once I get going, the flow is fine. That issue, I suppose, could also be related to the ink as I don’t recall noticing that with the Private Reserve cartridge.

Rubberized Cap
Like the grip, the cap is also rubberized, which gives this portion of the pen a nice black matte look. The branding (name, logo, and founding date) is imprinted into the cap, so it’s there, but barely so. A classy look, I think. I do find that crumbs and lint tend to find their way into the imprint (grrrr…look at the “F” below), but it’s not really noticeable until you blow up a photo. The cap snaps into place with a firm and convincing click. 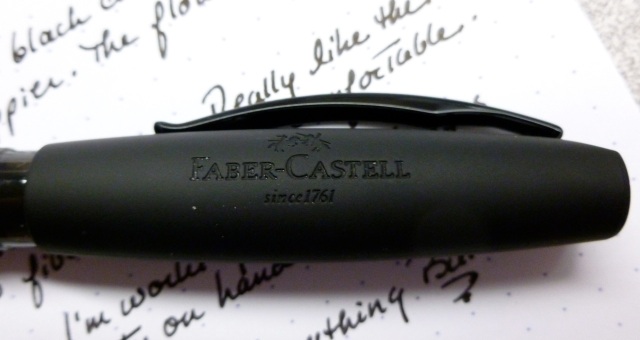 Posting the cap makes the pen too looooong to hold (7-1/2″), while the unposted pen measures 5-1/4″ and feels just right.

Spring-loaded Clip
The clip has a cool looking profile and is very strong and springy. Great attributes in a clip. Because of the grippiness of the rubber cap and the springiness of the clip, the pen stays put. No worries there.

According the the Faber-Castell website, the BASIC line is also available in Leather and Mother-of-Pearl (and as ballpoints and rollerballs). Pretty much something for everyone.

When I hear “basic,” I think stripped down and generic. Though this pen has simple lines, it’s full of Faber-Castell goodness. Nothing BASIC here.