Back in the 90’s, my cousin and I took a road trip to Maine. As we were backing out of the driveway, my aunt waved and shouted, “No novelties!” (?????) I guess she was thinking of us as little kids, when we were prone to blowing our allowances on Super Balls, Silly Putty, and good luck trolls. So throughout our drive up the coast, whenever we stopped at a gift shop, we’d hold up touristy lobster-covered objects and ask each other, “Is THIS a novelty?” The joke just didn’t get old.

Though the days of trolls (I had quite the collection) and enormous pencils and crazily twisted drinking straws are behind me, I AM still drawn to the occasional novelty. Enter the Retro 51 Tornado ZAG Limited Edition rollerball.

I’ve written about the Retro 51 Tornado before, but the ZAG has a surprise twist that made it irresistible to this pen collector. Like all Retro 51 pens, the packaging is both unique and fun.

Doesn’t that bike remind you of your childhood?

Words to live by

The box is clever, but the packaging doesn’t end there. The pen is tucked inside a very cool metal tube (that sort of pops when you pull the top off). How novel! 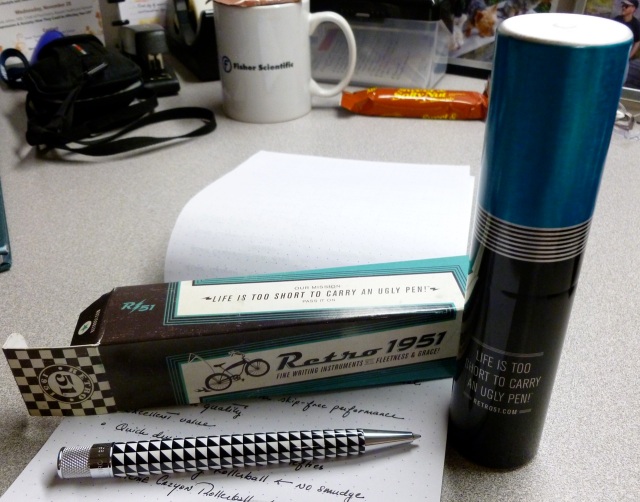 But that’s not the REAL novelty. Nope.

The build quality is superb, and I especially love the knurling at the end of the pen.

Twist this to extend and retract the rollerball

But that’s still not the novelty.

The ZAG GLOWS IN THE DARK.

With its cool packaging, smooth rollerball performance, obvious build quality, AND its glow-in-the-dark trick, I could not resist the Retro 51 Tornado ZAG Limited Edition pen.

——-
You can find the ZAG at:
Jetpens.com
Daly’s Pen Shop