This weekend, on the way home from a meeting, the friend who was giving me a ride asked if I’d mind taking a bit of a detour to see some kittens who were recently discovered under the porch of an acquaintance. (I know…world’s longest sentence.) Would I MIND?! For KITTENS?! Heck no!!

I won’t go into a lot of detail here (imagine that), but let’s just say that there was some serious cuteness going on in that yard and under that porch. There they were…four calicos and one back-and-white…skittish and clumsy and oh so tiny. 100% pure cuteness.

And THAT is what the Kaweco Liliput has in common with kittens. It is tiny and 100% adorable. And tiny. Really tiny. You have to see it to believe it. 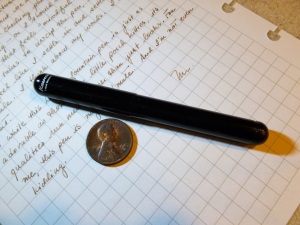 When Brad Dowdy talked about the Liliput on a recent Pen Addict podcast, I started browsing on JetPens right during the show– and I was smitten. I THINK I’d run across it before, but hadn’t given it more than a passing glance. I had my Kaweco AL-Sport. I was happy. But then, as the days passed after that podcast, I couldn’t stop thinking about this seriously small fountain pen. (I think I even had a dream about it. Yeah. Weird.) Long story short(ish), I cracked. And I’m glad I did. 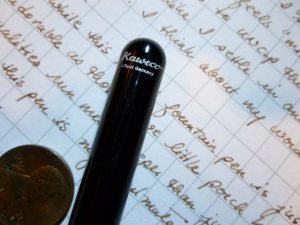 I have a few fountain pens- mostly Lamys- and they’re fine, but the EF nib on this Liliput is the smoothest nib I own. Like buttah! I ordered Kaweco sepia cartridges along with the pen, rather than my typical black, and love the ink as much as the pen. They’re just the perfect combo. 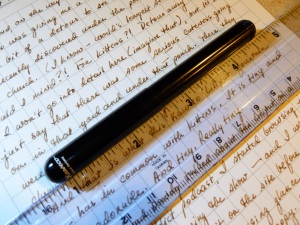 What’s also unique about this pen- at least to me- is that the cap threads onto the end of the barrel, giving you enough length to hold and write comfortably. 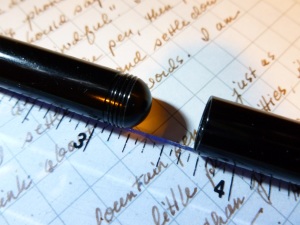 Threaded barrel for posting the cap

Because the cap and barrel are threaded, you can’t just whip the pen out, pull the cap off and write. There’s a little bit of time involved to unscrew the cap, then thread it onto the barrel. This doesn’t take long, but it feels like a tiny ritual, and I like that. Because so much of what we do and how we work is done almost by reflex, I like having something- or I should say, using something- that feels “mindful.” In the few moments that it takes to uncap the pen, then post the cap, I feel like I settle in and settle down. I exhale. I think about my words. I am present. 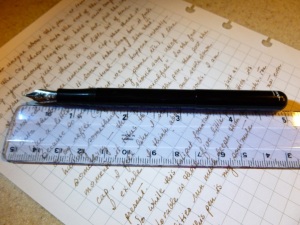 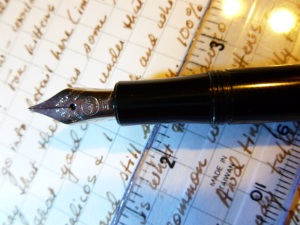 That’s not to say that this pen isn’t without its drawbacks. If you have large hands, or require a grip, or have a tendency to lose things, this probably isn’t your pen. 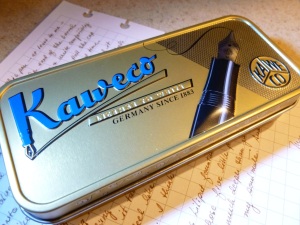 I’m a total sucker for this packaging.

So while this Liliput fountain pen is just as adorable as those five little porch kitties, its qualities run much deeper than its good looks. For me, this pen is my soulmate. And I’m not even kidding. 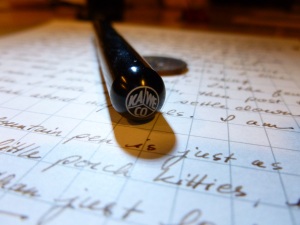